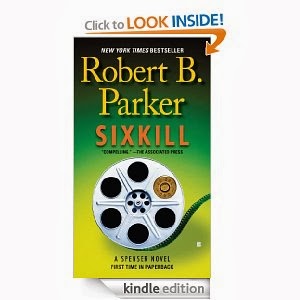 This is our slow month of the year.  By slow I mean the day job, United Portrait Studios is scheduling for the new year, which means Christina and Adrienne are busy booking and scheduling photo shoots, while I'm writing a blog every day, putting the finishing touches on Lessons Learned, a just completed novel, finally getting Southern Investigation Tucson published, while thinking very seriously about finishing The Sages, the first in the mystical series.

What I'm not doing is a lot of driving, which will change next month when the scheduling that Christina and Adrienne are doing now kicks in.  That means I'm not devouring my usual one or two whispersynced for voice Kindle/audiobooks.   However, I still listen when I'm running errands or picking up Starbucks lattes for the troops.

Last Sunday, with Starbucks on my mind, I headed for the front door and after a few steps, stopped in my tracks when I realized that I didn't have a book to listen to, and my current read, a Travis McGee novel wasn't yet whispersynced.  Quickly, I opened Amazon.com with no clue where to go when divine intervention stepped into the game and visions of Robert B. Parker flashed into my mind.

I've read all of Parker's books.  So, with no particular book in mind, I plugged in "Spenser," went quickly down the list to the first one that said it was whispersynced for voice, I clicked the page, and since I had already purchased it, navigated straight to "add professional narration," and opened the audiobook app on my phone as I headed toward the door a second time.

I got in the car as the download completed, clicked the icon, and heard this:

In case you didn't recognize the voice, it's Joe Mantegna, actor, well known for his role on Criminal Minds.  Until last Sunday, I had no idea that Joe did voice over.  Now I know that it's a big part of what he does, and already I'm looking forward to hearing more of his work.

Christina and I are working on our home studio, and I'll keep you posted on our progress.  Good narration adds a whole new dimension to a book.