Home Recording With Roger the Sound Guy and Harlan Hogan 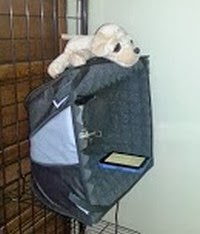 That's Roger the Sound Guy, lying on top of our Harlan Hogan Porta-Booth Pro, which is finally residing on the Porta-Sound Stand that I just assembled and set up (it took about three minutes) after staring at the two boxes it arrived in for more than three months.

Under Roger, inside the Porta-Booth and barely visible, is our VO-1A Harlan Hogan Signature Microphone, Mike Stand, and a couple of other pieces of Harlan Hogan Gear.  Yep, we are Harlan Hogan fans.

Plugged into the mike and not visible in the photo is a MicPort Pro - used and recommended by, you guessed it, Harlan Hogan.  This is a very simple and most effective piece of recording equipment.  The link I put in will take you to a YouTube Video that demos it nicely.

The thing that led us to Harlan is the lack of space in our small house.  We wanted a home recording booth but every bit of research for building one in a small space began with, "you too can convert your extra closet into a recording studio."  We don't have an extra closet.  In fact we're about three closets short of having enough closets.  Then we found Harlan and his gear.

I'll be telling you more about recording your own books, Harlan Hogan gear, and Roger the Sound Guy, in the weeks ahead, as I master Adobe Audition, my audio software. But that's enough of the logistics.  Here's Chapter 3, of Lessons Learned.