Writing In The Old Days 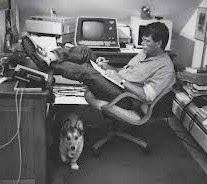 That quote is the first paragraph of the latest introduction to In Search of Lost Time, by Marcel Proust.  Richard Howard is a poet and translator.  He teaches literature in the Writing Division of Columbia University’s School of the Arts.

I don't totally agree with Richard, but I know and acknowledge where he's coming from.  In fact, he said more eloquently something that I've said, mostly to deaf audiences for a long time.

Writing and publishing has evolved to its present state as the natural result of:
1.  The demise of the small publisher.
2.  Followed, almost immediately, by the death of the old agents who worked with the small publishers.
3. The rise of the internet.
4.  The ease with which "the public" can write and publish their seldom read books.

If I were to sum up Howard's remarks and my list of four causes of the state of the business, I would say—"It's too easy to write a book".

There was a time when a book was a herculean effort, managed only by a few men and women who were willing to bleed, in solitary confinement, and sweat shop conditions to bring their words to us.  Today, books are hammered out on smart phones and smarter tablets, by people tweeting their hype as "best selling authors" during their corporate coffee breaks. That is too easy.

However, the condition will change through evolution, not revolution.  That evolution will begin when once again there are men and women, working alone, unconditionally putting their souls on the line, in exchange for our entertainment and hopefully, our thoughtful consideration.