Why Is None Of Your Business 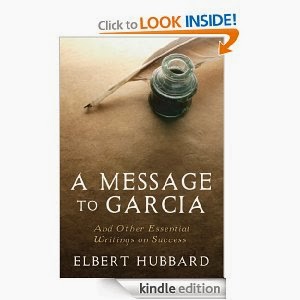 The Spanish American War, so named because of the principals involved, was actually waged in Cuba. It lasted ten weeks, not very long by today's standards.  The historical reason for the war was Spain's protest against  American involvement in the then current Cuban Revolution.  The only reason Spain was upset was Cuba was one of its colonies.

So, it might be more apt to call it the Cuban Colony War Fought By The United States And Spain.  In fact, maybe all wars are wars of colonization but I digress. Let me get this post back on track.

One evening, in 1899, Elbert Hubbard wrote a short, inspirational essay for the Philistine, a monthly publication whose target audience was businessmen.  Elbert didn't even title the piece in its original printing. It was an instant success, ultimately inspiring two movies and a booklet that sold over 40 million copies.  Today it has been translated into 37 languages, and its publishers claim the number of times it has been printed is second only to the Bible.  And it's still going strong.  Click the link that follows, and you'll find yourself on an Amazon page that gives a "published on Amazon" date of Jan 14, 2014.  That's two days ago, which is two months short of 114 years after it was originally published.


A Message To Garcia

The essay was based on a true story.  In a time of no radio, WiFi, internet, email, or even telegraph communication, in the wilds of Cuba, where the insurgent leader General Garcia was headquartered, a way had to be found for President McKinley to communicate with the rebel leader. The way, the only way, was to send a handwritten message.  Therein came the problem.  Who would carry the message?

Here comes the inspiration for the story, that when printed, accounted for more copies than any printed matter other than the Bible.  Captain Andrew Rowan of the U.S. Army, was dispatched with the message.  He crossed the island alone, found the General, and established a communication link that was instrumental in the concluding the conflict to the satisfaction of both the United States and the insurgents.

Forget right or wrong and winners and losers for a moment, and consider the point that Hubbard made that is still selling copies of the story—When told what the mission was, Captain Rowan didn't ask why or how.  He simply said, "Alright."  He then wrapped the message in oilskin to protect it from the elements, strapped it on his back, and said "Let's get the show on the road."  (the dramatization is mine, but you get the point)

"Why" and even "How" questions are cop outs that delay at best, or totally paralyze at worst.  How and/or why questions cannot coexist with commitment and intention... unless of course your commitment is failure and your intention is to lose.