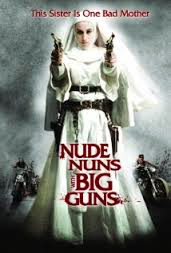 Finding a good movie has become a chore for me.  I don't know if I'm too picky or if there is too little to pick from.

Today, as I browsed through Netflix, after exhausting possibilities on Amazon and then Acorn, Nude Nuns With Big Guns caught my attention.  Not as something to spend my lunch time watching but because of the unlikely connection of Nuns, Nudity, and Guns.

I mulled that over, threw in a question that is always near the front of my mind—how do I sell more of my books, and out came an answer I'd not considered - creating new book genres based on three, normally not connected topics, like Nuns, Nudity, and Guns.

Then I remembered and old office "copy and pass around" joke from my long ago corporate life.  The essence of the joke was to select a single word from each of three columns of words, then use them as a phrase in a business letter.  The lists were like this (in fact, they were much longer than this example):

So, with the list in hand, when you wrote your next interoffice memo to your supervisor regarding your new prospective customer, you created a meaningless phrase from the word list and wrote, "After exploring the partnership joint entry point possibilities, we discussed..."  Remember, the lists were long and the possibilities ran into thousands and more than likely the phrases they created sounded, at first hearing, plausible, though not understandable—like a politician campaign presentation.

As I thought about that long ago, rather humorous pass time, I considered Nude Nuns With Big Guns and went to the next logical place - create lists of possible story lines from unrelated topic lists, like:


I know this is a joke, but if some writers that I know, like Stephen Woodfin, or Russell Blake, or Renee Pawlish get hold of this list, we are bound to see books about:

Ugly Soldiers With Money, or Hideous Zombies With Sticks, or Glamorous Teachers with Boats... this could work.

Oh, here's the trailer for Nude Nuns With Guns - enjoy: